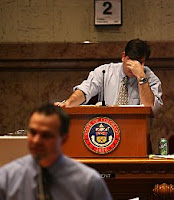 That’s exactly what current State Senator Brandon Shaffer did with Senate Bills SB06-223 and SB07-046. These two bills, which Senator Shaffer co-sponsored and voted in favor of, would’ve effectively overturned Amendment 36 (this amendment would have changed the way in which the state apportioned its electoral votes). The latter senate bill had an amendment to it that would “refer to people under referendum”, Senator Shaffer voted NO. Bottom line, he wanted to undo the voters will in 2004 and not give them a chance to be heard again on this issue.

Why would he do this? These bills were the brainchild and pet projects of Senate Majority Leader Ken Gordon. You didn’t think Mr. Shaffer moved up the ranks to Assistant Majority Leader in the Senate so quickly just on looks, did you? When you’re a good soldier for your leader and your party, there are perks. I asked the question, but didn’t get an answer, as to how often Senator Shaffer voted against his own party. On all the important bills that I looked over he towed the party line straight down the line. Even if that meant undoing and silencing your vote.

Bipartisan? Independent? Hardly. Tell Mr. Shaffer you don’t like your vote played with and vote NO on retaining him in his State Senate District 17 seat.