By Chris Rodriguez | October 7, 2008 - 6:13 pm |October 7, 2008 Politics
Let it go, Longmont
The people of Firestone have spoken in favor of annexing the Union site. Why continue to fight, Longmont ? Time to let it go.
Longmont’s Mayor Roger Lange stubbornly insists that the city must protect its eastern buffer. It’s an argument that makes no sense in view of the current lay of the land around the Union property.
The image/graphic shown below is from LifeBridge & 4C–produced more than five years ago, but remains illustrative today. (click to enlarge) 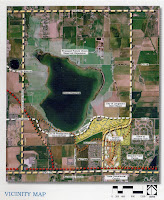 LifeBridge/Union is already surrounded by development on three sides…the large Meadow Vale housing development to the east…the Vista Commercial Center to the south…and the LongView community to the west. To the north, there is plenty of city-owned land for Union Res. and surroundings, enough for expanding the reservoir if needed.
Building Union doesn’t change any of these entities, nor does it disrupt Longmont ‘s eastern boundary. If Union has Meadow Vale on the east side, LongView on the west side (both in unincorporated Weld Co.), plus increasing development on the south side of Hwy 119–how in the world is the Union plot compromising Longmont’s eastern buffer? Clearly, this bogus argument shows partisan politics at its worst from our city leaders.
Further pursuance of this matter amounts to pure spite by the Longmont City Council, and a disgraceful waste of city time and resources.
Dave Larison
——————————————————————-
Dear Mr. Mayor,
The comments in DTC this a.m. over Longmont ’s official attitude about the Firestone Election define to me just how far the City of Longmont has fallen in esteem with the general public in less than ten short months. I have not seen the Administration make a full disclosure to the People of Longmont what the costs of these lawsuits against Firestone will be. And a professional presentation defining, not white washing, the systemic risk is to the city’s financial system the new Council’s blunder has presented the public from the hostile business atmosphere policy that drove LifeBridge out of the City’s jurisdiction after Council approved the project to the people of Longmont .

Right now Council’s policy is popular with a handful of people constituting an oligarchy in a City of almost 100,000 people which (these people) do not represent nor have anything in common with except breathing the same air. There is more to the responsibilities of being on this City Council than just representing introverts posing as social progressives to the exclusion of any other interest or purpose in life. Many people have seen government destroy their 401ks and retirement programs; blame for drop in property values starts at home, the mortgage crisis situation and repossessions right now has stabilized and there are less resale homes on the market now than this time last year. So what’s holding back recover is primarily City policy and that will come out in public as time and events move on beyond the election.

Even though it is not required by law, wouldn’t it be prudent and politic to make a full disclosure to the public before an uncontrolled witch hunt starts of its own initiative?