Fissinger billboard issue to be prosecuted

Things are about to go from bad to worse for the Kaye Fissinger campaign.  On Monday October 26, the Longmont Election Committee found in the affirmative for a Preliminary Hearing on the issue of her billboard.  This could be a very costly fine, well in excess of what the campaign has left over from it’s failed run.  This reminds me of when Jack Pommer was fined a huge sum of money and then used contributions to cover it.  And those poor suckers (and none too bright) who thought they were giving money to help him get elected were really just paying future campaign violations. 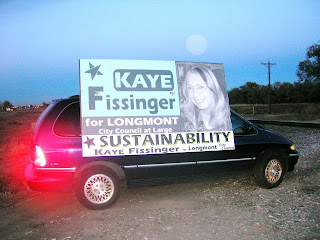 In case you didn’t see it, and I bet many of you did, here it is (pictured at right).  As you can see it’s fairly large (look at minivan for scale).  They claim it’s 4′ x 8′.  The invoice for this sign also indicates it was black and white.  Some of it is, but not all of it.  It might be hard to tell but the lettering on the bottom has some color to it as well as the top left, which is pretty obvious.

By the way, the initial complaint and response can be found at this link at the City Clerks website.

The response by the campaigns secretary, Charles Hansen, is almost an admission of guilt in a few places.  First off, it seems imperceptible that the printing of the sign you see (and there are two of them attached to the vehicle) cost $7.38.  There also was no shipping fee (the company is in Las Vegas, NV), but there was 56 cents in tax (apparently picked up in Boulder, CO).   There was also an expense of $42.26 at Lowes for the Masonite panels and hardware used to make these signs.  So we’re supposed to believe the total cost for these items was $49.64?  Ludicrous.

But the more damaging information is the apparent ability to do time travel.
Get this timeline:
July 30 – purchase of panels and hardware at Lowes
August 1 – this sign is first seen at the Boulder County Fair Parade
August 25 – “ORDER DATE” and “DATE REQUIRED” on the invoice for the printing of this sign from Mercury LDO Reprographics
August 31 – date given for the Mercury LDO expenditure on the first campaign report
So we’re supposed to believe the sign seen at the parade wasn’t ordered or printed until 24 days AFTER the parade?  There is no proof in the supplied documents in the response that shows the printing was made prior to August 1st (expect it to magically appear now).  Unless, the actual printing for this sign was done earlier and logically (look at the sign again) was much more expensive than $7.38.  But there’s no accounting for that anywhere.
The expense of the vehicle must also be accounted for, there is no other way to transport or display this sign.  It is not “parked..in the regular course of daily activities” as the response says.  The picture you see was taken off the Diagonal Hwy during rush hour for the sole purpose of electioneering.  The vehicle was parked near the railroad tracks and was blocking access to private property.  The van wasn’t just parked, it was strategically placed and the driver was in the vehicle.  While the driver can claim he was volunteering his time, the same might not be said for the transporting and displaying by the vehicle.  No vehicle, no sign viewing.  That expense should be accounted for and was not as an expenditure or in-kind contribution.

Each possible violation carries a fine of $100/day for up to 10 days.  If the Election Committee finds both as being violations of 2.04.207 of the Longmont Fair Campaign Practices Act, the total fine could be $2,000.  The committee just fined Longmont Leadership Committee and showed no leniency in the fine, sticking to the ordinance.  It will now be seen if they will distribute these fines in a fair and equitable manner.

Of course, the election is now over and as I predicted Kaye Fissinger finished 4th out of 5 candidates, beating out Ed Dloughy who didn’t even campaign.  Seems this traveling billboard may have been a negative as it reminded everyone exactly who and what she was, and they just couldn’t stomach voting for her.

5 Responses to Fissinger billboard issue to be prosecuted