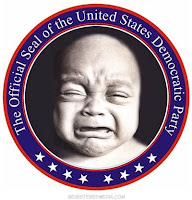 You need to make your own determination on what you believe when it comes to these threats supposedly being made on both sides of the political spectrum.  Based on my own experience I (shockingly) tend not to believe our friends on the left, with good reason:  I’ve caught them lying repeatedly, and have witnessed their tactics first hand.  What’s so humorous is when they cry and whine after someone does to them exactly what they were doing previously.

Here’s an example of their outright fraud:  I was at the “Porkulus” rally in Denver last year, along with other Longmont residents.  Lurking amongst the crowd was a well known hardcore leftwing agitator, so we watched to see what he was going to do.  A tactic they often use is to show up at something like this or a Tea Party rally, pretend to be one of them, and wave swastikas and say racist things.  It’s not hard and comes naturally as many of these leftists are racist bigots at heart – I’ve seen it and experienced it.  Sure enough, this guy and his group didn’t disappoint.

There is no doubt in my mind that is precisely what occurred recently in Washington D.C. during the health care debate and protests.  Case in point is the racial epithets hurled at John Lewis (Dem-GA).  One of two things happened, and this isn’t just my opinion:  either a leftist plant hurled that epithet (quite likely), or someone is a liar.  Oh, how I’m sure they wish what was reported actually occurred, of course there’s no proof whatsoever, no audio, no video – and there was video being taken of the event.  Why would I say they wished it occurred?  Witness Jesse Jackson Jr panning back and forth trying, imploring anyone to say anything racist.  Much to his chagrin, no one did.

(For the ongoing list of the left’s fake hate campaign, read this.)

Then there’s our own poor little Betsy Markey, who apparently had her vote bought based on recent advertisements paid for by the Service Employees International Union (SEIU, yes, that SEIU – Democrat strategist Pat Caddell said of them: “What I said about Andy Stern and the SEIU? Sure, they’re thugs“).  And now she’s receiving threats, or so it’s reported.  How very “thuggish”, ever thought it was one of your own Betsy?  You should.  Ah, the company you keep.

Actual bullets flew towards a Republican’s office (Eric Cantor Rep-VA), not some phoned-in supposed threats from a left winger sitting in his basement in his underwear.  Prior to this incident he’d received letters negatively mentioning his religion (he’s the highest elected Jewish politician in the country).  Yep, probably a leftwing nutjob.  Whenever any liberal/progressive feigns outrage at racially motivated incidents like this, or repeatedly reminds you how tolerant they are – don’t buy a word of it.  The fact they constantly remind us should tell you something, right?  It’s because more often than not it’s total bunk.

This feigned outrage by the left I take about as seriously as Al Gore’s concern for the planet as he leaves contrails galore in the sky.  I seem to remember 8 years of much worse from them towards President Bush, et al.  Do we really have to make a list of what they said about him, or say, Sarah Palin?  Hey, I almost forgot – they’re bigots and sexists, and of course hypocrites.  Maybe some people have forgotten, but not all of us.  So spare me the manufactured outrage.  Then there’s the misleading astroturf:  Seen all of those supposed “Republicans” in TC Line decrying Republicans in the health care debate?  Believe it at your own risk – this is yet another tactic of the Lying Left.

My favorite tactic of theirs is to go after something like a church (RMCC, LifeBridge, etc) knowing the church probably won’t go after them with the same dirty, ugly zeal the leftists engage in.  And then when anyone comes to a church’s defense, oh the humanity!  How could these “good church people” do/say such things?  It’s something called being a “provocative victim“, can spot it a mile away.  It shows a very infantile mindset, which is par for the course for some of our Longmont examples.

Lastly, another tactic used nationally and locally is this creepy stalking behavior.  Always on the lookout for irony, I laughed when I saw the Times-Call editorial about a guy who took video of someone and posted it on the internet, and paid a steep price for it, and rightly so.  We pretty much can’t go anywhere without someone snapping pictures of us and posting them on the web.  Yep, right here in Longmont.  If you are thinking of taking your kids to a public event like a City Council meeting, beware that you and your underage daughter or cub scout may show up on these leftwing nutjobs websites (they have multiple names but are all the same people).  And they brag about it.  Yes, it’s all innocent, sort of like those hidden cameras under tables during the anti-LifeBridge petition activities.

Thankfully, this is yet a small minority of the Democrat Party – I won’t say it’s all of them, that kind of generalization insults both of us.  I’ll just quote Pat Caddell again when he said “What they have created is a world in which there is no dissent. Don’t look at me. Look at [Sen.] Evan Bayh. People, with some justification, may think that I’m crazy. But he is the center of the establishment if there was ever was someone. When there’s no room in the Democratic party for him and there’s no room in the Democratic party for me, and the unions do get to make those kinds of calls in defense of the indefensible, because, ‘We own you,’ well, the Democratic party will be finished.”