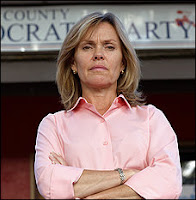 With the recent announcement by Democrat Michigan congressman Bart Stupak that he wont seek reelection, it continues to be clearer that these members of the House, Senate, and some state Governors (like our own Bill Ritter) put party above country.  If they’re not prostituting themselves for special deals for their states or big money for their campaigns (like our own Betsy Markey and the Service Employees International Union – SEIU), they are taking themselves out and refusing to have their constituents judge them on their recent voting record.  True cowardice.
They see the handwriting on the wall, that a large majority of U.S. citizens are against ObamaCare, and that their favorability ratings are about as low as they can go.  They hoped that these citizens would not remain engaged and would forget all of this come November.  Betsy Markey, according to the usually Democrat-friendly Associated (De)Press, and Washington (Com)Post wont even talk about her ObamaCare vote.
Did Colorado get deals like the “Cornhusker Kickback” or “Louisiana Purchase”?  No, the voters of Colorado were given the gift of endless SEIU commercials thanking Betsy Markey for contradicting all of her previous NO-vote comments last year and succumbing to the will of Nancy Pelosi and Harry Reid.  Any and all thoughts of Ms. Markey having a spine and an independent streak should, along with Ms. Markey, be put out to pasture.  She puts party above you.  (Pop question time:  how many SEIU members are even within the 4th Congressional district?)
It’s hard to say who’s more cowardly,  those that are easily bought or those who would rather retire than face the voters wrath, the ultimate poll.  People like Bill Ritter, Evan Bayh, Bart Stupak and others are getting out of the way to pave the way for those Democratic seats to remain Democratic seats.  Politicians have monster egos, I think everyone can agree with that.  For these politicians to step aside and not show pride in their increasingly unpopular voting records and agendas really says something.

Much like the Politburo in the old Soviet Union, they have either been told or figured for themselvesthat to save the Mother Party they should step aside.  These are the same people who so proudlyclaimed the people spoke in ’06 and ’08 but fear what the people will say now. Watch how their surrogate candidates (like John Hickenlooper) run from the records of those they wish to replace.
But there’s an easy end run around these slimy and cowardly tactics:  Deny a vote to anyone with “Democrat” attached to their name, simple as that.  They’ve proven a) there is no bribe/kickback/payoff too high, and/or b) party always comes before country.  Show them the door in November, and vote early by denying them your contribution dollars.