Congresswoman Betsy Markey (CO-4) has once again voted lockstep with the leftwing element of the Democratic Party, and against her own constituents.  Now it’s the seemingly innocent sounding DISCLOSE Act, which stands for Democracy is Strengthened by Casting Light On Spending in Elections.

If you go to the website for this bill, you’ll see all of the support Betsy Markey must have felt emboldened by.  This site is signed by none other than U.S. Senators Charles Schumer, Russ Feingold, and Patrick Leahy.  Did I mention it has a whole 64 Facebook members who “Like” it?  Stunning.

For you in Longmont, which is a big chunk of the voting block in U.S. District 4, as you read through the DISCLOSE Act, it may sound a little familiar.  That’s because it has similarities to the recently gutted Longmont Fair Campaigns Practices Act, or LFCPA.  (Full disclosure:  I was a plaintiff against the city and the LFCPA, and won.)  In the lawsuit Western Tradition Partnership VS City of Longmont, a federal judge issued an injunction against parts of the LFCPA, and eventually the city settled with the plaintiffs and took some of the worst parts of this ordinance.  Not long after, the U.S. Supreme Court struck down the Citizens United case, which had similarities to ours.  The DISCLOSE Act is an end run by the very undemocratic Democratic majority in Congress.

This wont happen often, but I’m on the same side as the ACLU (not a member) and against the National Rifle Association (not a member) on this issue.  What the NRA did by carving out a special exemption for themselves was awful, singling out an amendment they like (2nd) and to hell with another (1st).  Also, unions come out pretty good in this “Act”, and while I’ve never been a member of the NRA, I have been a union member for almost 30 years.  Just because the organization I pay dues to might benefit means nothing to me if it’s bad for the future of this country.  They also supported Betsy Markey, that’s at least two strikes. 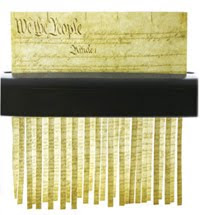 My part of the LFCPA lawsuit was the 1st Amendment aspect of it.  Many of the more clueless in and around Longmont, including current and former elected council members, wrongly said “no one’s freedom of speech is being limited“.  They never got it, it was a matter of forced speech.  Is it really that complicated?  I was being forced to put ridiculous, unnecessary, and potentially logistically impossible statements on any piece of literature or yard sign.  This DISCLOSE Act does similar things, and while, like the LFCPA, it is being sold as “more information on contributors is a good thing” angle, it completely misses the point of First Amendment issues.  I seriously doubt it will get past the U.S. Senate, and will either be reversed by the next Congress or struck down by the Supreme Court.

Here’s the bigger problem with representatives like Betsy Markey:  They just don’t care about their constituents, will say one thing and vote another way (healthcare reform in Markey’s case), and are getting more desperate as their political futures look grim.  She’s lied right to the faces of her District 4 constituents, but just doesn’t seem to care.  You think it’s bad now, just wait what happens if she and other incumbent Democrats lose this November.  The flurry of despicable activity and questionable laws passed in the lame duck session will be staggering.

Yet another reason to not reelect Betsy Markey to the U.S. House of Representatives.