When you have a campaign manager for two of the biggest electoral flops in recent Longmont history behind you (Karen Benker and Richard Juday), it’s no surprise that you’ll come across mistakes like this.
Whoever is running Longmont mayoral candidate Dennis Coombs Facebook page – and we’ll just have to assume it’s Mr. Coombs himself or that he’s approving everything on it – has recently made the suggestion that supporters should call the Times-Call‘s T-C Line and show support for Mr. Coombs.  Here it is:

You’d think someone running for mayor, or their staff, would know at least a little something about the local paper and it’s rules for letters and TC-Line phone calls.  I’ll go ahead and educate them:  this is from the Times-Call’s website, which is also in every paper every day. 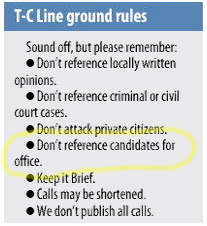 So, which is it?  Were they ignorant of the rules, or want you to call in anyway?  Remember, the group of people supporting Mr. Coombs had no love for the Times-Call until a major newspaper conglomerate bought them out.  Who needs local papers anyway, right?  So now they have their Denver Post/Boulder Camera clone, and still can’t get it right.

This mayoral race between Mr. Coombs and incumbent Bryan Baum really shouldn’t even be close.  Mr. Coombs is guaranteed 30%-35% of the local ignorati, you know, the losers who attack family members and friends of Mayor Baum, real trash acts.  Don’t waste your vote on their candidate, because that’s exactly what you’d be doing.

Chris is the editor/publisher of LightningRod Blog - as well as founder/editor of Wrongmont, Longmont Advocate, Vote!Longmont, Longmont Politics, the LightningRod Radio Network, as well as being the original Longmont Examiner. Chris is a writer and talker - whether it be blogs, podcasts, music, or public speaking. When he's not heard on Air Traffic radio, he can be heard on his podcasts or seen in the local paper causing trouble.
View all posts by Chris Rodriguez →
Tagged Bryan Baum, Dennis Coombs, Karen Benker, Longmont, Richard Juday. Bookmark the permalink.