Another election, and plenty of opportunities lost.  First, with the Presidential race I got 44 out of 50 states right, which is my worst call yet.  But, I was far from alone on that one and people far smarter and more prominent than I got it even worse.  At the time of this writing, Florida still hasn’t been officially called, but I assume Obama will get it and a final tally of 332-206, although the popular vote was much closer than that Electoral College number looks.

On my list of poll closings and things to look for, it was clear early on that things were not going Mitt Romney’s way.  It was no surprise that Ohio took quite a while to call, and when the networks finally did it was indeed the state that put Obama over 270, and they projected him as the winner.  On its face, and with the additional bad night the GOP had in Senate races, it looks like a disaster for the GOP.  It bears a lot of resemblances to the bad night the Democratic Party had in 2004.  But, I say “on its face” for a reason.

I’m not cheerleader or water carrier for the GOP, but the following picture is important to keep in mind: 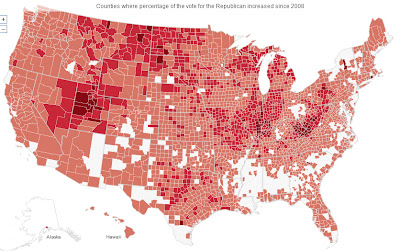 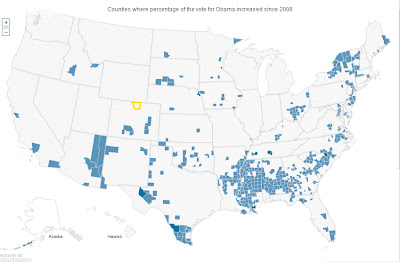 (Source: Wall Street Journal)
This should not be confused with the map that shows counties red/blue based on who they voted for, because many of the red ones still went for Obama, just by less.  What this shows is probably different than what is being told to you or how you feel about how this election really went, regardless of what side you’re on.

As far as the Senate races, let’s face it: a couple Republicans lost because they made stupid comments about rape, a couple others lost because they were Liberals, and another one lost because he was a “moderate”.  And truth be told, Mitt Romney was no conservative.  But plenty of people have already weighed in on this and more will in the future, lets get to more local races.

COUNTY, STATE, CONGRESSIONAL
Really no surprises here.  The redrawn state assembly districts played out exactly as expected with all of the Democrat candidates winning fairly easily, and of course the ongoing joke of how Boulder County Commissioners are elected.  While Brandon Shaffer did well in Boulder County, he did poorly in CD4 overall and was beaten fairly convincingly by Cory Gardner, no surprise there.  Other initiatives went pretty much as expected.

FRACKING
Longmont Ballot Question 300 passed at about a 60/40 margin, wasn’t really close.  This after more than half a million dollars were spent by the oil and gas industry.  The margin says that not only did Democrats vote for this, but Independents and Republicans as well.  They will soon find out that was a stupid mistake, and I don’t say that often about the voters will.  But putting that aside, why did this fail?  The same reason Mitt Romney lost – poorly executed voter outreach and get-out-the-vote (GOTV) activities.

Sure, they spent lots of money on TV ads, mailers, newspaper ads (this goes for the No on 300 crowd as well as the Romney campaign), but I never heard about much of a ground game.  Campaigning from an arms length like this is a risky strategy, and potentially a big waste of money.  I broke with the local GOP establishment a year ago or so (which really started with the local campaign of 2009), and actually quit the GOP over things like this.

Based on campaigns in ’09 and ’11, and now ’12 can be added to that list, I’ve about given up on the local “machine” (it goes by many names) and I’ve pretty much been persona non grata with them for a while now, which is fine with me, I’ve never been much of a joiner anyway.  This was an easy issue to defeat with the right messaging and some old fashioned foot work.  But like I’ve seen before with this machine, it seems that’s below them.  And again, they lost.  Snatched defeat right out of the jaws of victory you could say.

THE FUTURE
What does this election portend for next year and beyond?  Nationally, I expect the midterms of 2014 will be like most midterms in the second term of a presidency:  the opposition party (GOP) will makes gains in the US Senate and House.  2016?  Too soon to say.  Locally in our 2013 elections, I suspect the fracking ban will drive what occurs here.  I will be shocked if any of the ban survives a court challenge and lawsuits by mineral rights owners.  I’m not sure the city will bother defending it as they don’t have to if they chose not to.  How it will affect the 2013 election will depend on how quickly the ban is overturned, and how much the city is on the hook for any legal expenses.  If it’s fairly expensive and services are cut, or property taxes are increased to pay for it, whoever runs on the “anti-fracking” candidates will be clobbered by the electorate.

If the ban remains with no cost to the city or taxpayers (sort of too late for that as we are already being sued), then the anti-fracking candidates could get a couple seats on council.  Of course, if the ban stays, there is the issue of revenue that would have come to the city going somewhere else.  Make no mistake though, those pushing for the fracking ban don’t care about that or energy independence – just their own self interests, the rest of the city and its future be damned – but that’s just my opinion.

In the next piece, I’ll go further in what it means for yours truly personally…