On Episode 27 of Longmont Politics, Chris talked about the Times Call refusing to run his “Longmont’s Liberal/Progressive Thugocracy“ editorial, and made some comments in general about the newspaper/media industry.  Then it was onto Ballot Question 300 (the ban on fracking) and how it’s main speaker is now saying that if the ban (and cost of lawsuits or private property concerns) gets too expensive, we can just repeal it in a special election!  Chris read the editorial by four councilmembers asking voters to vote NO on 300, and then played audio of Longmont City Council Mayor Pro Tem Gabe Santos speaking to council – as a private citizen – also imploring voters to vote NO on 300, citing the excellent Denver Post editorial requesting the same.

Chris then passed along rumors on the campaign trail relating to 300, and thoughts on the St. Vrain Valley School District mill levy 3A and how they are illegally placing yard signs all over the city.  It was then on to observations around the city, including the shortage of Obama yard signs, and the possible outcome of the various races, including State House, Congressional, and Presidential races. And yes, some predictions were made.

Music played in this show was “How The World Ends” by Modern Science – courtesy of Music Alley.

Join Chris Rodriguez and his guests as they talk about the topics of the day. While the show will lean towards Longmont, Colorado with emphasis on politics, there’s no limit to where the show might go and may apply to your hometown. Leave a voicemail which we may use on-air at (720)924-1080

(This is obviously an April Fools joke.  But that doesn’t make it a bad idea)
LONGMONT – An idea that many in Longmont say is long overdue.  A City and County of Longmont?  Not exactly. 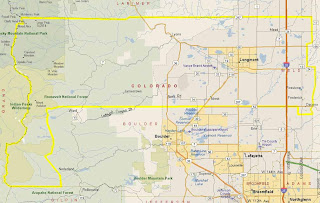 Longmont’s Mayor Bryan Baum and Firestone’s Mayor Chad Auer, along with administrators from Mead, Dacono, Lyons, and Frederick are in talks of creating a new county – with the working name “St. Vrain County”.

It would encompass those cities plus extend westward to the Grand County line to include the Eldora Ski Area, which has complained for decades of living under the “iron fist of Boulder County”. Continue reading →

St Vrain Valley School Superintendent Don Haddad recently tweeted on his Twitter page that “I realize that there are some people who still do not fully grasp the seriousness of the state’s budget. We will continue to inform.” He hopes to use a series of meetings (schedule found below) to answer and take questions from parents and those affected by the expected current budget shortfall at the state level.

While the district is facing a $11M budget shortfall, Haddad also recently wrote that the SVVSD has opted not to apply for President Obama’s “Race to the Top” grant.

I rarely comment on, and even rarely write a post about, Open Forum letters in the Times-Call.  But there was one statement made in the Saturday February 20, 2010 Open Forum that was just too much of a hanging slider to pass up on.

A Matthew P. Brandt of Longmont was taking local education advocate Brad Jolly to task for comments he recently made about the St. Vrain Valley School District (SVVSD).  I followed the original issue very minimally but have found that usually Mr. Jolly is right on the money and has almost been prophetic when it comes to the SVVSD and their missteps.  Like myself, he has a way of polarizing opinions of citizens and takes his fair share of shots because of it, I can respect that. Continue reading →